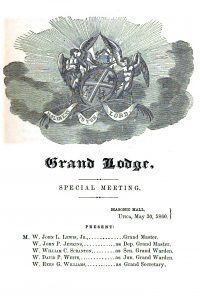 “Union Star Lodge, No. 320 , located at Honeoye Falls, was officially visited by me, where I was received with tokens and manifestations of the most fraternal character; and while performing this pleasant duty, its well-filled hall exhibited specimens of aged membership which no lodge in this district can boast, and which are seldom witnessed in any lodge, and to which I take much satisfaction in alluding. Many of these venerable brethren seemed well-nigh down life’s eventful hill, and about ‘to enter upon that bourne from whence no traveler returns;’ yet none were more eager to listen and derive instruction than were they – none whose deportment was more truly Masonic – none whose attention to the regulations and ceremonies of our order were more firmly adhered to, than by these aged brethren. They evinced a wonderful zeal to acquire the Grand Lodge work, as they had not received it, except in part, from the Grand Lecturer, and said much of the antique had crept in among them; and when I consented to exemplify the work, none were more on the alert to catch every word than were these old fathers in Masonry, some of whom have stood nearly half a century at the portals of our sacred temple – while the strict attention given by all the members of this lodge was peculiarly pleasing. They number sixty nine members, and have initiated three during the past year, which shows they have an argus eye to the kind of material used in the erection of their moral edifice.”

“There are but three Masonic papers taken by the members of this lodge.”

“Harmony and brotherly love prevail, and all are united in their efforts to ‘adorn their profession,’ and in doing good to all.”

“The records of the above named lodges I found correctly and neatly kept, and all relating to them in proper order.”